Welcome to the fourth annual Eclipse Foundation Community Report. Comments and feedback on the style and content would be appreciated at emo@eclipse.org.

The following are the strategic goals of the Eclipse Foundation for 2015, as set by the Board of Directors.

Be the developer platform of choice. The goal of Eclipse is to define a development platform that is freely licensed, open source and provides support for the full breadth of the application lifecycle, in many disparate problem domains, and across the development and deployment platforms of choice, including embedded, desktop and the web.

Recruit and foster Eclipse projects in those domains. It is an important part of the Foundation's role to be recruiting new projects in areas outside of Eclipse's historical strengths in tools and IDEs. Some recent successes would include the surge in new projects related to the model-driven tools for systems engineering, the Internet of Things (IoT), science, and location-aware or geospatial technologies.

Create value for all its membership classes. The Eclipse Foundation serves many members whose primary interest is leveraging Eclipse technologies in proprietary offerings such as products and services. The Eclipse Foundation will focus its energies to ensure that commercial opportunity exists within the Eclipse ecosystem. Look for continuous improvements to Eclipse Marketplace, and for other initiatives that benefit members.

Committers are also members of the Eclipse Foundation and are in many ways its backbone. The Eclipse Foundation and its staff will continue to look for opportunities to improve services to its project community throughout the year. Look for continuous improvements to our web, download, code management, build and other key components of project infrastructure in 2015.

Foster growth of our communities and ecosystems. The creation of a large community of commercial and open source organizations that rely on and/or complement Eclipse technology has been a major factor in the success of Eclipse. Each time Eclipse technology is used in the development of a product, service or application the Eclipse community is strengthened. Our goal in 2015 is to focus our attention on the creation of working groups and new Eclipse projects that focus on particular industry segments such as IoT, web development, mobile, automotive, science, and finance.

Continue to grow a diversified revenue model. Reliance on a single source of revenue to fund the Foundation puts us at greater risk of being negatively impacted by industry specific business cycles. It is a goal of the Eclipse Foundation to ensure revenue sources from multiple types of organizations, and seek other sources such as events and sponsorships.

Development Funding. The Eclipse Foundation has begun to accept targeted corporate contributions to fund enhancements to the Eclipse Java and Java EE IDEs. As an initial success in January 2015 Ericsson provided the Eclipse Foundation the funds to enhance the Eclipse platform that resulted in SWT, Mac platform, GTK3, and PDE improvements available in the Mars release.

FOSS4G NA. Working with the LocationTech and OSGeo communities, the Eclipse Foundation produced FOSS4G North America, co-located with EclipseCon North America. Adding a fourth conference to our event schedule was a big undertaking for the Foundation staff, and we were delighted with the positive feedback we received from the open source geospatial community.

The Eclipse Foundation welcomed three new strategic members to the Board of Directors in the past year. In June 2014, Codenvy became a strategic member and committed to creating the Eclipse Che project to host their cloud-based development tooling platform. In the first quarter of 2015, CEA List and Red Hat both increased their membership level from Solutions to Strategic Developer. CEA List leads the Papyrus modeling project, and is deeply involved in the PolarSys Working Group. Red Hat leads the Thym and Linux Tools projects, and invests numerous resources in the Eclipse and Web Tools Platform projects.

The recruitment of new projects and members has been greatly assisted by the strategy of creating working groups (WG). As participation in WGs grows, our membership has grown and diversified into different industries such as automotive, aerospace, geospatial, and the Internet of Things.

The EclipseCon conferences, Eclipse Days and DemoCamps are the primary events that the Eclipse Foundation supports to help foster the strong personal relationships in the community that only face-to-face contact can create. We highly encourage all Eclipse community members to participate in these events.

The second edition of EclipseCon France was held in June 2014 and had 251 attendees. EclipseCon France introduced an Unconference that provided an opportunity for Eclipse Working Groups to organize workshops, brainstorming sessions, and hackathons to foster collaboration.

With a growing Eclipse ecosystem in Europe, EclipseCon Europe also continues to grow. Co-located with the OSGi Community event, we welcomed 600 attendees to the conference. We received a very positive feedback from our sponsors, attendees and exhibitors. EclipseCon Europe 2014 was a lot of fun with new ideas like the IoT Playground and integrated events such as BPM Day and Project Quality Day.

In March 2015 EclipseCon North America and FOSS4G NA were co-located in Burlingame, California. Overall attendance was 775, of which 430 were FOSS4G, making it the largest FOSS4G NA to date. The Eclipse Foundation, on behalf of the LocationTech working group, played a significant role in organizing FOSS4G NA, an event featuring technologies from OSGeo, LocationTech, and others. Roughly 30 percent of FOSS4G attendees were women, which was more than double the historic proportion in a FOSS4G conference of this size.

Membership renewals remained strong, working group revenue and website advertising both continued to grow. Despite originally budgeting a $0.6M loss, the Eclipse Foundation controlled expenses to result in a reduced shortfall of $0.4M. The organization continues to be on a solid financial footing.

During the time period spanning April 1, 2014 to March 31, 2015, the Eclipse Foundation received 1,275 requests for code review and completed 1,302 reviews.[1] As more Projects come on board, the need for code review continues to grow, particularly for the Eclipse Foundation’s working groups. In January 2015, the backlog of requirements reached an all time high of 307, slightly edging out the previous high of 306 reached in 2012. The result has been an increased delay in completing IP reviews for some projects. In an effort to address this issue, an additional IP analyst will be hired in 2015. 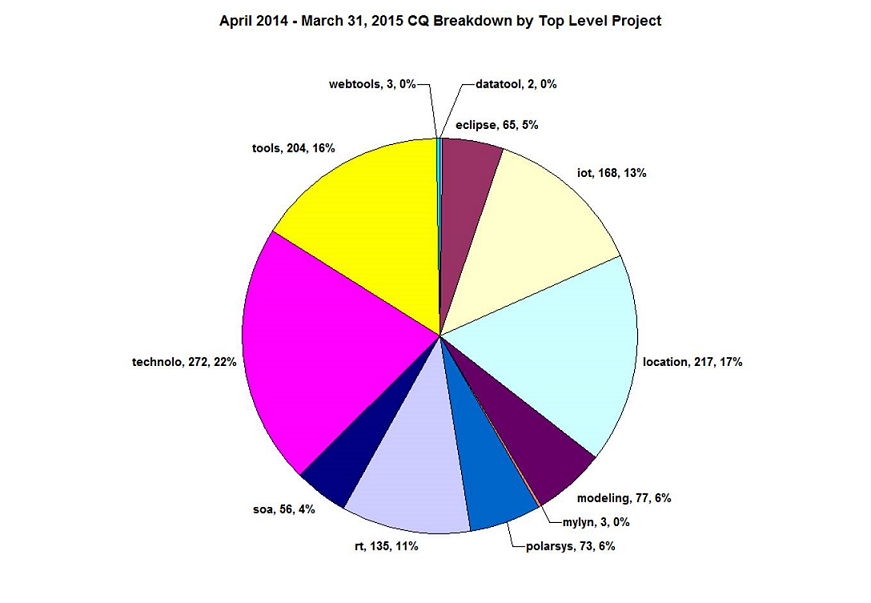 As of the time of writing, the IP team remains focused on the Mars Release Train submissions which came in at 73, consistent with the number of submissions received in 2014 for Luna. As of March 31, the backlog of IP requests rests at 260. Approximately 36% of that backlog relates to working group requirements, and 22% relates to requirements from projects in the Technology top-level project.

We posted 34 new projects proposals in 2014, exactly matching our number for 2013. Reflecting a growth in the project diversity, more than half of the new projects fall under the Technology, Tools, and Eclipse Cloud Development top level projects. This includes ICE and DAWNSci from the Science WG, and three projects restructured out of existing Eclipse projects. The new Eclipse Cloud Development project welcomed three project proposals. The IoT working group brought in six new projects, and LocationTech and PolarSys brought in three new projects each.

The past year saw two new initiatives that will have a significant impact on innovation in the Eclipse community in the coming years.

In addition to the Automotive, IoT, LocationTech, openMDM, PolarSys and Science projects noted above, the following projects were proposed at Eclipse over the past year:

In June 2014 the Eclipse community shipped Luna, its ninth annual simultaneous release. Including previous releases of the Eclipse Platform, this was the eleventh release that was shipped on time to the day. Seventy six projects participated in the Luna simultaneous release, comprising 61 million lines of code, and produced by 420 committers from 54 member companies.

This predictable release schedule has been a key part of Eclipse's success over the years, and is an important part of the success of the Eclipse ecosystem.

Three projects dropped off the simultaneous release in 2014:

After nearing the mark for several years, the committer population at Eclipse now exceed 1,200, ending the period at 1,208. 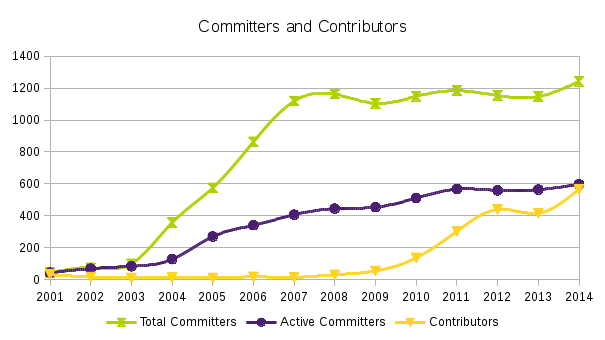 Over the past several years, the Eclipse Foundation has been focusing on reducing barriers to contribution to Eclipse projects. The trend lines clearly show that this effort is bearing fruit, with an increase of almost 200 contributors in 2014. 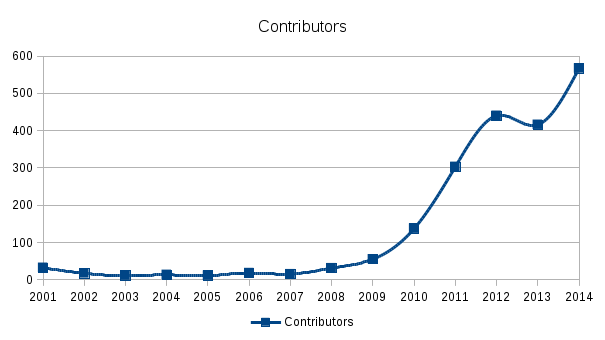 The EMO is committed to providing steadily improving services to the Eclipse committers and the projects they work on. Here is a sampling of some infrastructure metrics, plus some improvements we've put into place over the past year.