Welcome to the third annual Eclipse Foundation Community Report. Comments and feedback on the style and content would be appreciated at emo@eclipse.org.

The following are the strategic goals of the Eclipse Foundation for 2014, as set by the Board of Directors.

Along with the new logo comes a new, more restrictive set of guidelines for using the Eclipse logo.

We've also begun supporting GitHub as the main development tool used by projects for their day-to-day development, while maintaining internal mirrors of the GitHub repos. A GitHub hook is used to help guide committers through the CLA and signed-off-by requirements when handling pull requests from the community.

The recruitment of new projects and members has been greatly assisted by the strategy of creating working groups (WG). As participation in WGs grows, our membership has grown and diversified into different industries such as automotive, aerospace, geospatial, and the Internet of things.

The Eclipse Foundation has (together with other partners) applied as partner for the ITEA project AMALTHEA For Public (pdf). The project has been accepted and is waiting to be provisioned by the national authorities.

Meanwhile, we continue to work with the openMDM group (Open Measurement Data Management) in order to transfer the current openmdm.org into a new working group at the Eclipse Foundation.

At the time of writing, the active members of the IoT working group are 2lementry, BitReactive, Eurotech, ibh Consulting, IBM, and Sierra Wireless.

The group has attracted a strong group of technologies, including

In its second year of activity, PolarSys has grown in terms of membership and projects. Astrium, Artal, Ecole Polytechnique de Montréal, and University of Skövde joined the working group. The new projects extended the Polarsys tool chain to new activities in systems engineering and development.

PolarSys members participated to two events focused on embedded systems, SAE Aerotech in Montréal and ERTS in Toulouse, They received a lot of interest from the attendees. PolarSys members also published the first videos of PolarSys tools, and the first milestone releases for the PolarSys IDE.

The Eclipse Foundation continues to produce very successful EclipseCon conferences. In 2013, we added a third event, EclipseCon France, to our annual calendar. The first edition of EclipseCon France was held in June 2013 and had 246 attendees. The event was an excellent milestone for our growing Eclipse community in France and the aerospace and systems engineering community. EclipseCon Europe continues to grow as our annual European event and has a successful partnership with the OSGi Alliance to co-locate the OSGi Community Event. EclipseCon North America 2013 was located in Boston, MA and provided an excellent opportunity to reach out to the Eclipse community on the east coast of the USA.

The EclipseCon conferences, Eclipse Days, and DemoCamps are the primary events that the Eclipse Foundation supports to help foster the strong personal relationships in the community that only face-to-face contact can create. We highly encourage all Eclipse community members to participate in these events.

Membership renewals remained strong, working group revenue and website advertising both continued to grow, and an increase in donations was a pleasant surprise. Despite originally budgeting a $0.4M loss, the Eclipse Foundation experienced a gain of $0.1M, and was able to contribute to its cash reserves. The organization continues to be on a solid financial footing.

During the time period spanning April 1, 2013 to March 31, 2014, the Eclipse Foundation received 941 requests for code reviews, and completed reviews of 849 requests. This represents increases of 2% in review requests and 15% in completed reviews over the previous year. By far, the greatest number of requests for review originate in the Technology top level project, followed by SOA and RT. Requests for review from these top level projects represents 73% of the requests for IP review for the time period. The three projects requiring the greatest degree of IP support were Stardust, followed by Winery and uDig; these represented 25% of the overall requests. 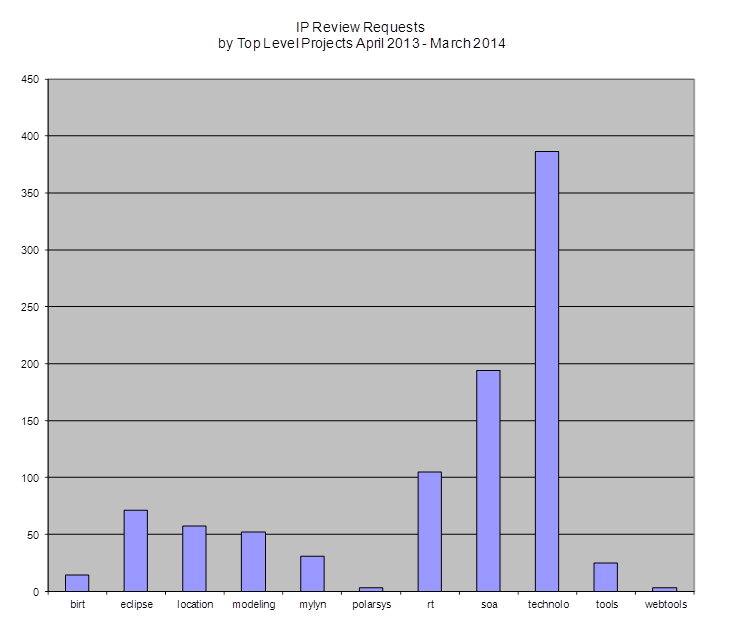 Growth in projects exploded over the past year. More than half of the new projects came to us through the Internet of Things, LocationTech, and PolarSys working groups. Naturally, many of these projects align with the goals of the respective working groups; in addition to these projects, we received proposals representing a diverse set of interests. 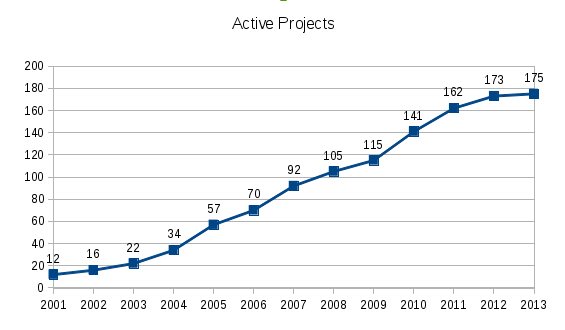 Overall, we received almost three times as many proposals for new projects in 2013 as we received in 2012.

In addition to the Automotive, IoT, LocationTech, and Polarsys projects noted above, these projects were proposed at Eclipse over the past year.

In June 2013 the Eclipse community shipped Kepler, its eighth annual simultaneous release. Including previous releases of the Eclipse Platform, this was the tenth release that was shipped on time to the day. Seventy-one projects participated in the Kepler simultaneous release, comprising 58 million lines of code. Over 180K downloads were recorded for Kepler packages in the first three days. This predictable release schedule has been a key part of Eclipse's success over the years, and is an important part of the success of the Eclipse ecosystem. 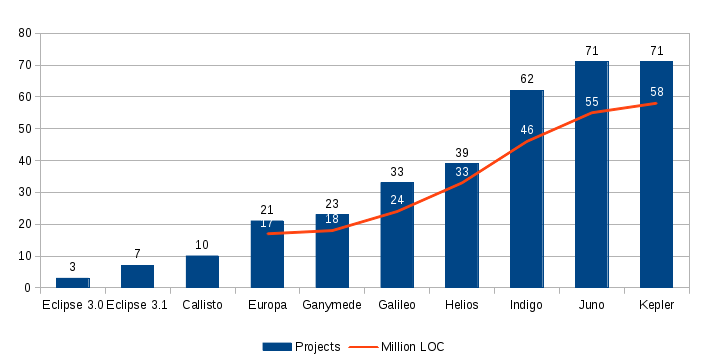 These projects joined the simultaneous release in 2013:

An equal number of projects dropped off the simultaneous release in 2013:

*Note that Xtend merged with Xtext (which does take part in the simultaneous release). 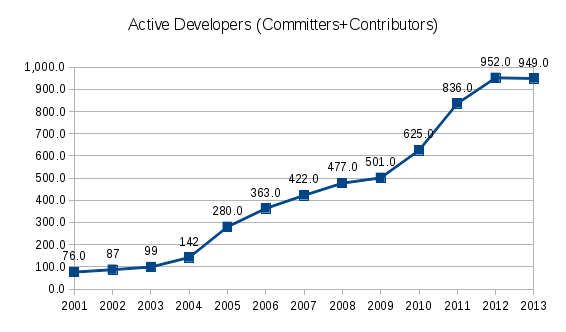 Plans are to support other OS platforms for HIPP, such as Fedora, Ubuntu, Mac, and Windows, to help support platform-specific builds and tests.

We've continued to make improvements and enhance the functionality. We rolled it out for PolarSys. In 2014, we plan to improve the overall look and feel and usability, and move the remaining project-management related functionality (the committer management functionality in particular).