Welcome to the second annual Eclipse Foundation Community Report. Comments and feedback on the style and content would be appreciated at emo@eclipse.org.

In short, our vision for the Eclipse community is:

The following are the strategic goals of the Eclipse Foundation for 2013, as set by the Board of Directors.

A summary of the past three years of audited financial results are contained in the table below.

The Foundation finished 2012 with a total of 186 members. By the end of March 2013, that number had increased to 190. Some of the companies who joined in the past year include: Architexa, Checkmarx, Combitech, Coverity, DevBoost, Eucalyptus Systems, HP, Intecs, Itpearls, Lucierna SL, OpenGeo, and WireframeSketcher. 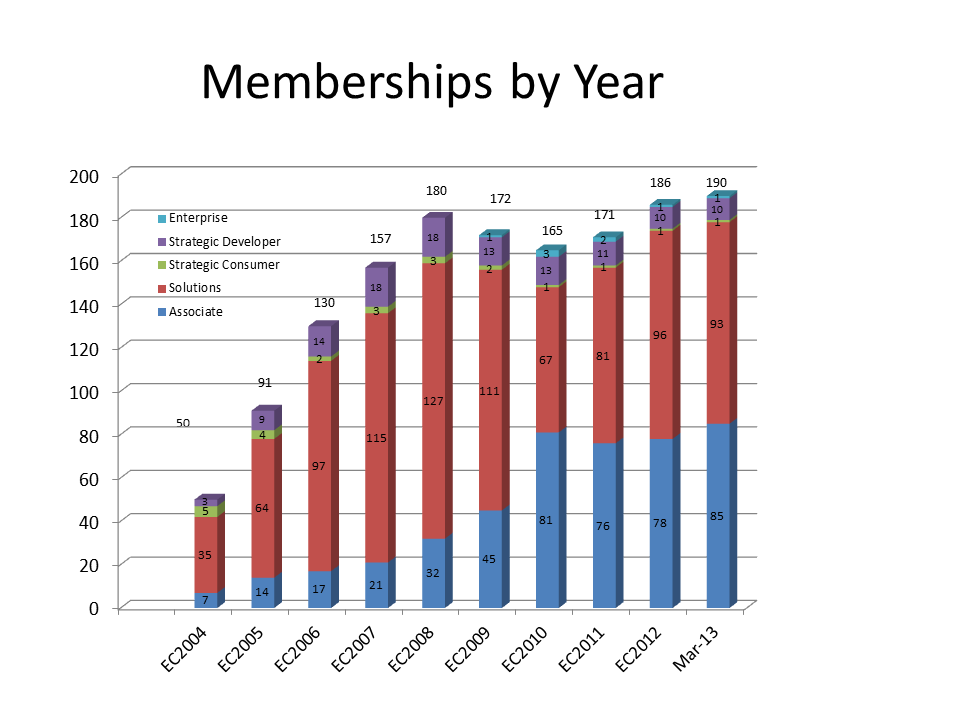 An important new program for Eclipse Members was launched in 2012. The Long Term Support initiative is intended to:

Fundamentally, LTS is intended to save time and resources for companies who have built Eclipse-based products, and require the infrastructure to support and maintain those products. Historically, building and fixing older Eclipse releases has been a difficult task. Worse, each company with this need was required to develop the necessary skills and processes necessary on their own. The goal of the LTS working group is to provide a single, shared service to make it easier to support and maintain older releases of Eclipse technologies that are embedded in commercial products.

As the Eclipse community has grown, it has become clear that there is a lot of demand for the Eclipse "style" of open source development, where there is a significant focus on enabling a commercial ecosystem as well as developing code. This has given rise to the Eclipse Working Groups, which are separate, identifiable communities of interest with their own consortium and projects. In some cases, working groups maintain their own separate forge, website, and brand. However, all working groups operate under the the auspices of the Eclipse Development Process and Intellectual Property Policy of the Eclipse Foundation.

No description of the Eclipse Foundation's activities can fail to mention our community's successful conferences. EclipseCon and EclipseCon Europe were both enormously successful. Both events were beyond our expectations with regard to participants, sponsors, and positive attendee feedback. As but one sample metric, the EclipseCon Europe 2012 attendees gave the conference an overall rating of 1.77 (1 = “Excellent, 2 = “Very Good”), the highest rating of any conference we've ever run. New in 2013 will be our first EclipseCon France.

The EclipseCon conferences, Eclipse Days and DemoCamps are the primary events that the Eclipse Foundation supports to help foster the strong personal relationships in the community that only face-to-face contact can create. We highly encourage all Eclipse community participants to participate in these events.

During the time period spanning April 1, 2012 to March 31, 2013, the Eclipse Foundation received 920 requests for code review and completed review of 740 requests. Resource constraints in the Intellectual Property (IP) arena were alleviated this past year with the hiring of Pablo Jacubovich who joined the IP Group as an Intellectual Property Analyst.

With increased activity in the Working Group arena and larger pre-existing open source projects moving to Eclipse, it is expected that we will see a rise in the backlog of requests for code review in the coming year and modest increases in turnaround time for requests for code review. Due to the modest growth anticipated, no further hiring is expected in the IP Group in 2013.

2012 saw a modest decline in the number of active projects and committers at Eclipse, however, there was at the same time an increase in the total number of commits. (This data is coming from an analysis of our repositories' activity.) 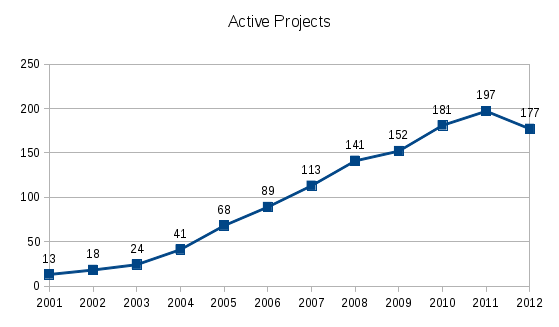 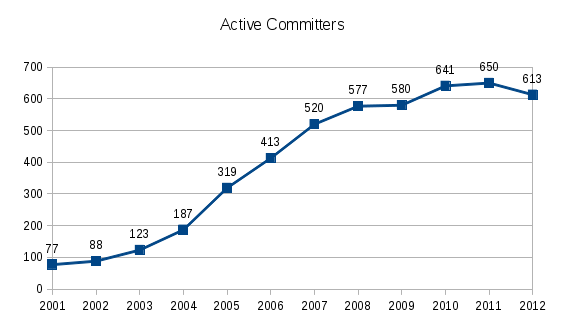 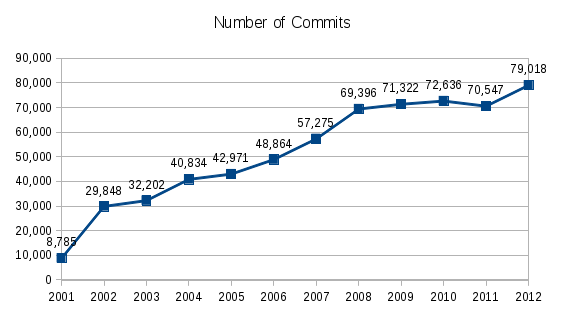 This predictable release process has been a key part of Eclipse's success over the years, and is an important part of the success of the Eclipse ecosystem.

With the release of Kepler in 2013, the Eclipse 3.x stream will no longer be supported.

Other Eclipse Juno highlights include:

It should be noted that significant performance issues were reported after the release of Eclipse Juno. Most of these were related to particular combinations of plug-ins and usage which were difficult to test for. The Eclipse platform team responded quickly and the February 2013 4.2.2. service release addressed most of the known issues.

The Eclipse Foundation attracted a number of interesting new projects over the past year. A small sample of those would include:

CBI has been deployed for a number of projects. For example, the projects using CBI are contained in 60+ git repositories. Notable in the list is the Eclipse Platform. The feedback for CBI has been extremely positive. People are impressed that for the first time, they can build the Eclipse Platform in minutes with very little effort.

In late 2012, the Eclipse Foundation completed the initial release of a new effort to replace the existing project management infrastructure – which includes the Developer Portal – with a new unified infrastructure with the intent of making project management activities more consistent and generally easier for all involved. The initial release was rolled out for Eclipse Projects and LocationTech in early 2013.

Themes of this effort include: