Welcome to the first annual Eclipse Foundation Community Report. When our community last revised its Bylaws in August 2011, one of the changes was the replacement of the annual Roadmap document with an Annual Community Report. This is the first such report, and as such it is a bit of an experiment. Comments and feedback on the style and content would be appreciated at emo@eclipse.org.

This makes the Eclipse community a unique open source community. Not only are we interested in building open source code, we are equally committed to creating a commercially successful ecosystem around that code. This combination of interests has been a key part of Eclipse's success in the software industry.

The following are the strategic goals of the Eclipse Foundation for 2012, as set by the Board of Directors.

There is no requirement that Eclipse projects must utilize the Java language or OSGi modularity (plug-in) model. 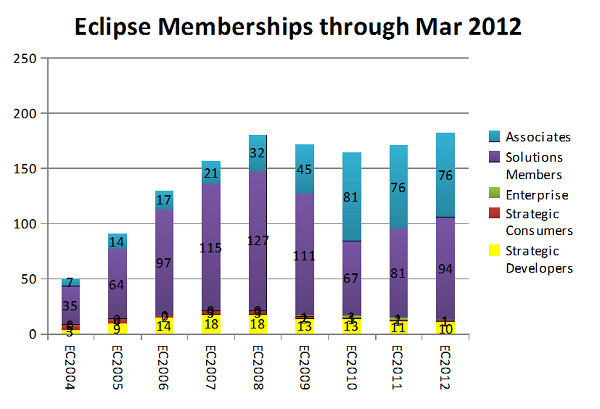 The recruitment of new members has been greatly assisted by the strategy of creating industry working groups (IWG). As participation in IWGs grows, our membership has grown and diversified into different industries such as automotive, machine-to-machine communications, and aerospace.

No description of the Eclipse Foundation's activities can fail to mention our community's successful conferences. EclipseCon and EclipseCon Europe were both enormously successful. Both events were beyond our expectations with regard to participants, sponsors, and positive attendee feedback. As but one sample metric, over 84% of EclipseCon 2012 attendees rated the conference as either “Excellent” or “Very Good”. The EclipseCon conferences, Eclipse Days and DemoCamps are the primary events that the Eclipse Foundation supports to help foster the strong personal relationships in the community that only face-to-face contact can create. We highly encourage all Eclipse community participants to participate in these events.

2011 was a solid year financially for the Eclipse Foundation. Despite losing Nokia as a major funder, and Strategic Developer Member, overall revenue was up slightly over 2010. Our website advertising program, initiated in 2011, was an important part of that success. Despite originally budgeting a $300K loss, the Eclipse Foundation made a small surplus for the year, which was contributed to its cash reserves. The organization continues to be on a solid financial footing.

During the time period spanning April 1, 2011 to March 31, 2012, the Eclipse Foundation received 1325 requests for code review and completed review of 1337 requests. With the January 2012 deadline to submit IP requirements for Juno came a high volume of submissions. As a result, The backlog of IP review requirements reached an all time high this past January that is likely to result in delays for the committer community for several months to come. The overall backlog of committer requests increased rom 79 on April 1, 2011 to 273 on March 31, 2012. As of the time of this writing all code requested for Juno has been reviewed for the community and significant progress has been made in Q1 2012 such that the backlog currently sits at 114.

Approximately 60% of the backlog consists of requirements from Incubating Projects that will benefit from parallel IP. To address the backlog, improve wait times for the community, and prepare the Foundation to deal effectively with IP contributions from new projects and Industry Working Groups, the Foundation intends to hire an additional IP Analyst in 2012. 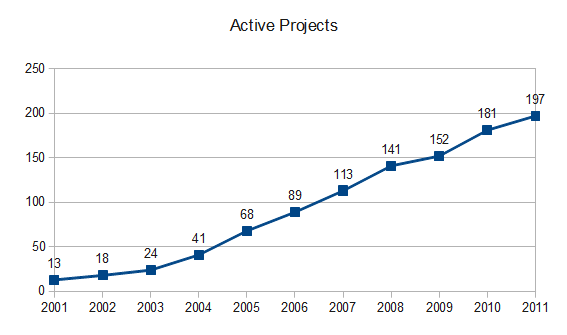 In June, 2011 the Eclipse community shipped Indigo, its sixth annual simultaneous release. Including previous releases of the Eclipse Platform, this was the eighth release that was shipped on time to the day. Sixty-two projects participated in the Indigo simultaneous release, comprising 46 million lines of code. Over 250,000 downloads were recorded for Indigo in its first three days. This predictable release schedule has been a key part of Eclipse's success over the years, and is an important part of the success of the Eclipse ecosystem. 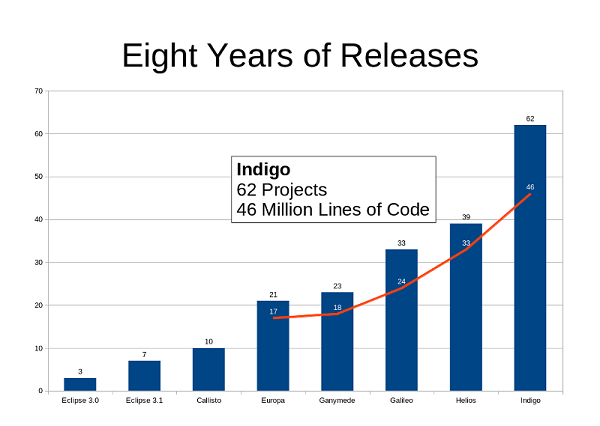 Highlights of the Indigo release include the addition of world-class GUI building support from the WindowBuilder project, Maven integration from the m2e project, and automated functional GUI testing for Java and HTML applications from the Jubula project.

2011 saw another release of the Eclipse 4 stream – Eclipse 4.1. Version 4 of the Eclipse Platform has had two releases since graduating from the e4 incubator, but was still treated as secondary to the 3.x platform generation. In the 2012 Juno release we will take the final steps to make version 4.2 the primary platform for enterprise level adoption. This work includes refactoring and cleanup of the workbench compatibility code, implementing Intro support, improving performance, addressing globalization and accessibility bugs, and regularly running the full suite of Eclipse SDK regression tests against Platform version 4.

The major goals of the 4.x release stream of the Eclipse platform include:

Eclipse tools have historically had a very strong correlation with the Java language. However, with the rapid growth of Rich Internet Application languages and technologies such as JavaScript and Ajax, the Eclipse community must support the requirements of these developers as well. Orion's objective is to create a browser-based open tool integration platform that is entirely focused on developing for the web, in the web. Tools are written in JavaScript and run in the browser. Unlike other attempts at creating browser-based development tools, this is not an IDE running in a single tab. Links work and can be shared. You can open a file in a new tab. Great care has been taken to provide a web experience for development.

Orion launched in early 2011 and continue to receive emphasis and promotion throughout the year. Orion is not targeted at the classic Eclipse developer, but is instead targeted at Web and RIA developers. This new development model and target audience will even further diversify and grow our community in new and exciting directions.

The increasing popularity of modeling and model-driven development continues to be an important driver for the growth of Eclipse. The modeling ecosystem is active and diverse with commiters from more than 30 different companies. New projects are created with regularity and are inherently integrated by virtue of their reuse of EMF's core APIs.

With the launch of Juno, EMF will be in heart of Eclipse 4.2 SDK's workbench model. This is a great opportunity for end users to discover the various interesting modeling innovations. 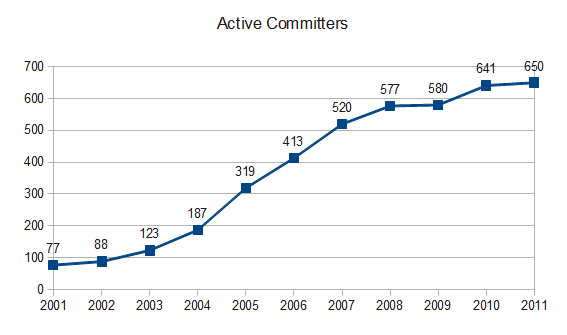 In addition to the above, in 2011 the Eclipse Foundation began a new effort to replace the existing project management infrastructure – which includes the Developer Portal – with a new unified infrastructure with the intent of making project management activities more consistent and generally easier for all involved. Themes of this effort include: