Eclipse VOLTTRON™ is an open-source distributed control and sensing platform (see figure 1) for connecting devices, managing data, and executing actions. To date, most of the 'applications' developed using VOLTTRON have been for buildings, the electricity power grid, and the integration of buildings with the grid to support the deployment of energy efficiency and grid services. VOLTTRON provides an agent-based programming paradigm to ease application development and minimize the lines of code that need to be written by domain experts (such as buildings engineers). The VOLTTRON platform has four primary roles;

VOLTTRON provides an environment for agent execution and serves as a single point of contact for interfacing with devices [rooftop units (RTUs), building systems, meters, etc.], external resources (weather, utility transactive signals, etc.), and platform services such as data archival and retrieval. It provides a collection of utility and helper classes which simplifies agent development.

VOLTTRON connects devices and external signals from the power grid to agents implemented in the platform or in the cloud. The platform plug-in provides additional capabilities for large-scale, real-world deployments. These enhancements include agent mobility, signing, and verification of agents, and resource management. The plug-in allows actors to sign agent packages as an acknowledgment that the code is useful, reliable, and beneficial. If the code is modified either in situ or in transit to a remote platform, it will fail verification and not be allowed to run. This mechanism is especially important for an app-store use case in which the deploying entity may not have first-hand experience with the code and must trust the entities who have signed it. The resource management allows platforms to ensure agents do not consume more resources that are available on the hardware and exhaust the system. The agent mobility service allows agents to move from platform to platform (either as directed by an administrator or self-directed).

The VOLTTRON platform communicates to devices and building controllers through the driver framework. Drivers periodically read data off devices (such as a building automation system controller) and publish data to the message bus via a topic for each device; it also provides a means to send control commands from agents to controllers. The driver framework simplifies the creation of new drivers by handling platform interaction and allows developers to focus on methods for communicating with devices. Modbus and BACnet implementations are included with VOLTTRON. VOLTTRON incorporates several open-source projects to build a flexible and powerful platform (http://github.com/ VOLTTRON). The key services and applications provided by VOLTTRON include the following: 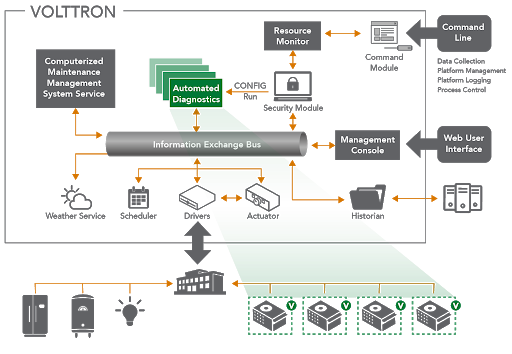 VOLTTRON provides security against unauthorized access to system data and unauthorized exercise of control functions. It isolates applications running on the platform from each other (if needed) and enforces resource utilization limits on the applications to ensure the stability of the computational platform. The software platform uses well-established and widely accepted security mechanisms, including elliptic-curve encryption, authentication, and authorization. When a peer (agent) authenticates to a platform, the peer is proving its identification. In other words, authentication is the process of finding a peer to an identity. Authorization is the processing of granting permissions or capabilities to peers based on their identity. VOLTTRON agents use authorization to selectively limit which peers can call which methods based on the peer's granted permissions. The software platform's authorization gives agent authors and platform owners fine control over who can use their agents and how their agents can be used. Additionally, communications with other VOLTTRON platforms use authentication and authorization functions to ensure that only legitimate transactions are performed. Access to the system through local management interfaces is also protected by similar security measures

The hardware requirements of the VOLTTRON platform depend on the intended role for that instance. The platform software itself consumes little resources, but the applications deployed into it and the services provided determine where this instance should run. An instance collecting data from a handful of devices could comfortably run on a single-board computer (such as RaspberryPi or BeagleBone, etc.). However, an instance supporting applications that analyze data from multiple buildings to aggregate grid services or optimize energy use across a campus could require the resources of a server. VOLTTRON's only requirement is that it runs in a Linux environment with needed prerequisites such as Python. 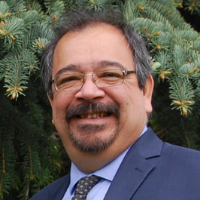