Embracing Java 9 and beyond with Eclipse JDT

The world around Java is changing at a fast pace. Java now has bi-yearly releases, this started March 2018. Java 10 was released in March 2018 and Java 11 is expected in September 2018. Not so far back, in September 2017, we had the Java 9 release. Quarterly releases of the Eclipse IDE in March, June, September, and December will help provide a release with a new version of Java without much delay. The latest release, Eclipse Photon is now available and supports Java 9 and Java 10. It has added compiler, UI and launching support for Java 9 and Java 10. 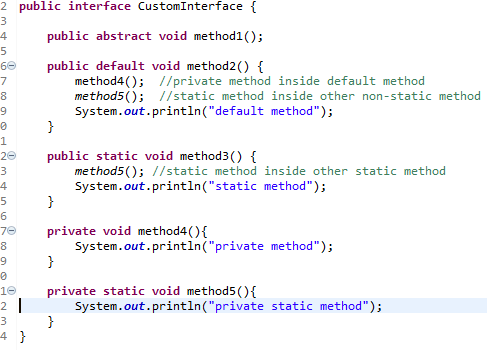 2. Try-With Resources enhancements – Java 8 mandated the variable to be created for the try-with resources block. Java 9 allows final and effectively final variables to be placed in try-with-resource blocks. 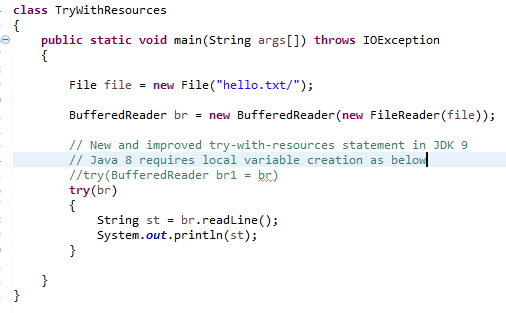 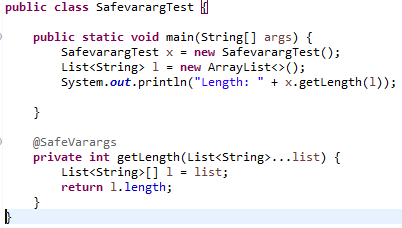 4. Collection Factory Methods – Java 9 has added simple ways to create immutable Collections without null values by providing a set of <Collection>.of methods. The created collection should not have null values and should not be modified later to avoid runtime exceptions. 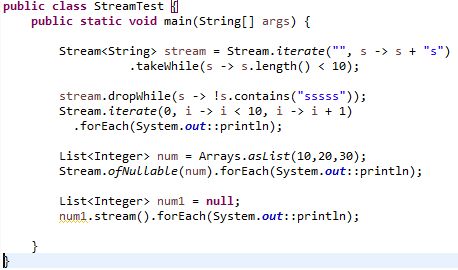 6. Option --release – Java 9 released –release option. In Eclipse IDE, if you have Java 9 in your build path you can still use the –release option along with compliance level 1.6 or more for the workspace or a project. Without this option, when Java 1.8 was on build path and the compliance level is set as 1.7, the code base still gets compiled against the APIs available with the Java 1.8 JRE found on the path. This is available only if build path has a JRE 9 or above and the compliance level used is 1.6 or more. This also means Eclipse does not need EE descriptor file and the default access rules for JRE libraries are not required anymore. Bot of these things can be achieved by the –release option. 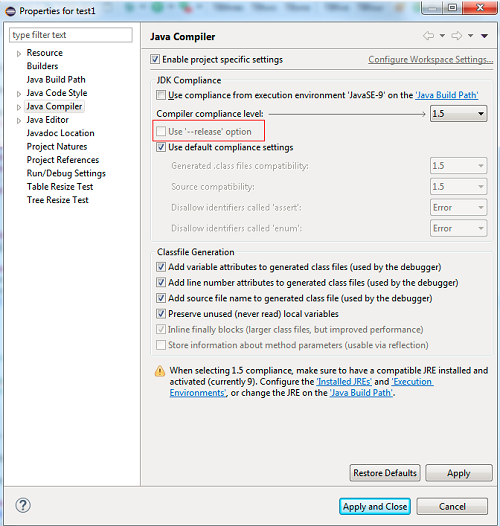 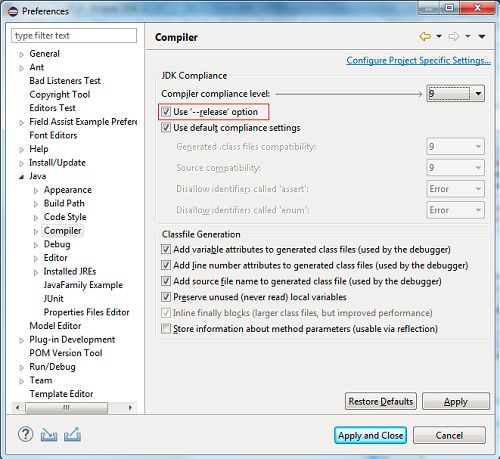 7. Modules – Project Jigsaw introduced the Java 9 Platform Module System. Module is a uniquely named reusable group of related packages, as well as resources and a module descriptor (module-info.java)
All JDK Modules starts with "jdk.*". All Java SE Specifications Modules starts with "java.*". Java 9 Module System has a "java.base" Module which is an independent module.

There are many UI features supported in Eclipse to help the Java programmers use Java Modules. 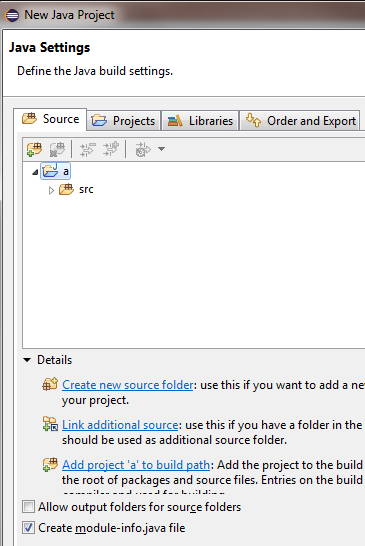 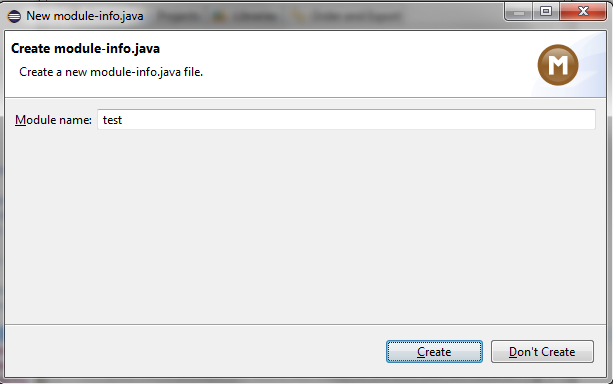 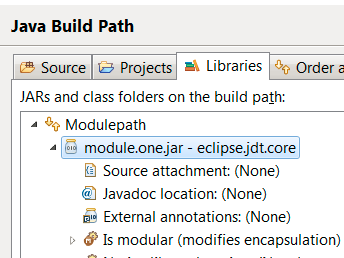 Java Build Path allows the addition of Projects and jars to Modulepath or Classpath. 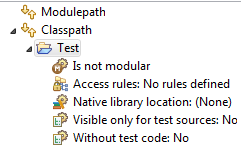 Is modular node is changed to Is not modular if the Build Path Project library is moved to Classpath. 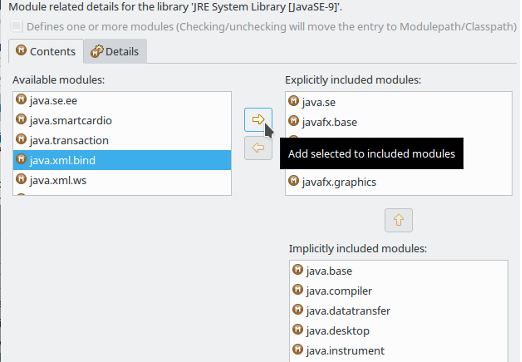 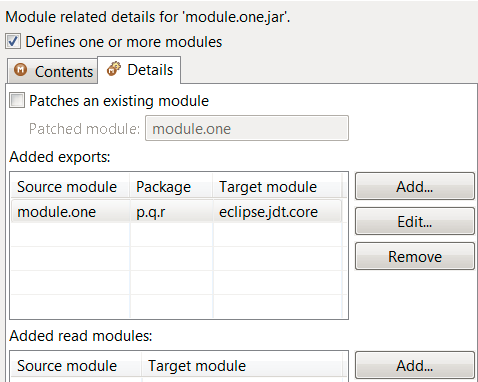 Encapsulation properties of Modulepath elements can be modified using Is modular node. The modules can be limited by adding the modules explicitly, the --add-reads and --add-exports ca be added to the packages in a module. It can be used to patch a module. 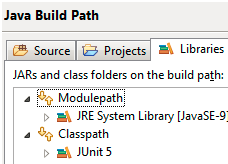 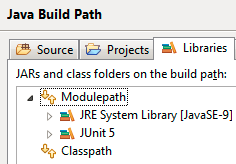 If a buildpath entry specified in Classpath is used in module-info.java, the Eclipse IDE will suggest moving of the classpath entry to modulepath.

Eclipse IDE provides a quick fix in a class to add requires to module-info.java.

Eclipse workspace provides a quick fix in import to add requires to module-info.java. 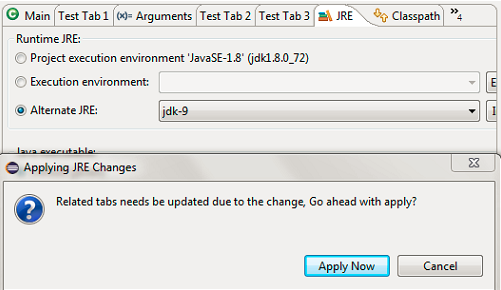 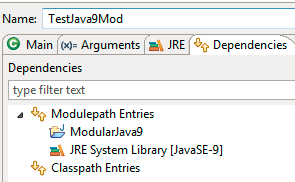 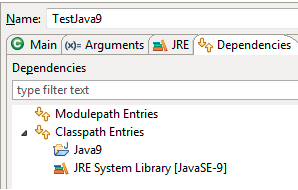 9. Overriding dependencies while launching for Java 9 and beyond – Override Dependency dialog allows a user to override the encapsulation rules like patching, adding exports, adding reads, limiting modules for launching. 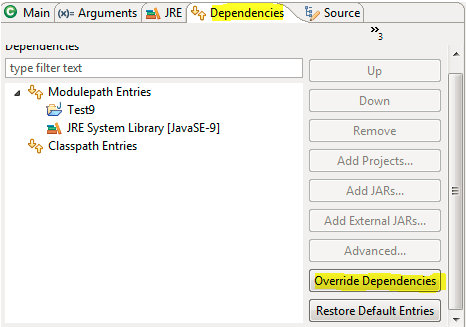 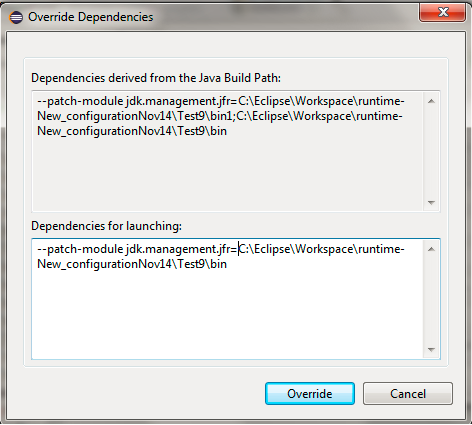 The dialog shows the dependencies derived from the build path and gives the option to override them.

Here's an example of mixing non-modular code in the named module: 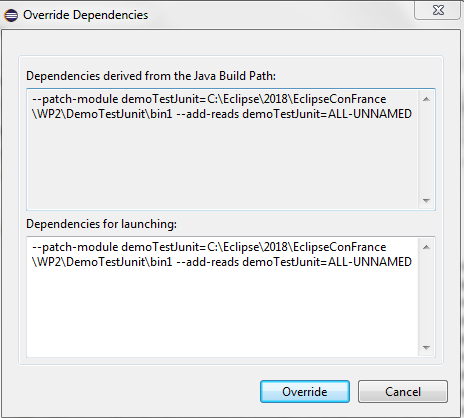 A Junit 5 test file in the test folder resides out of the module scope and needs to patch the module and --add-reads for the module to ALL-UNNAMED. 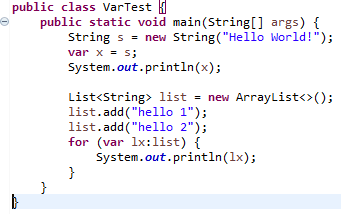 Eclipse IDE supports the autocompletion of var, it shows the inferred type on the hover.

Eclipse IDE suggests the usage of var or the inferred type to be used instead. 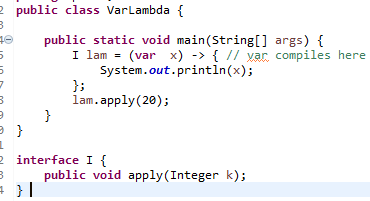 Eclipse IDE also suggests changing the compliance to 10 if the var that is used in a Project has a compliance level lower than 10.

A Java program can also be launched with future versions of Java.

This article covers some of the important features of Java 9 and Java 10 supported by Eclipse JDT. Some more details can be found at: 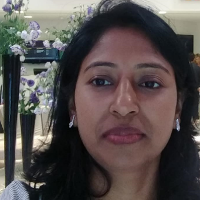