No C or C++ programmer likes to see compilation errors due to missing #include statements. Determining what #include statements are required to compile a given program is a tedious task. It becomes even worse when pieces of code are moved from one source file to another. Figuring out which #include statements should be added and which can be removed can easily become a lengthy process of trial and error unless assisted by a software tool.

We will now look at different aspects of the problem and learn how CDT approaches them.

Include or Forward Declare

C++ has quite complex rules for when a forward declaration is sufficient and when the definition of a symbol has to be visible at the point of use. Here is a simple example:


There are also more complex rules. Template type arguments, for example, can be forward declared for some templates but not for others:


It is not possible to tell whether forward declaration of a template argument is sufficient or not without examining details of the template definition. 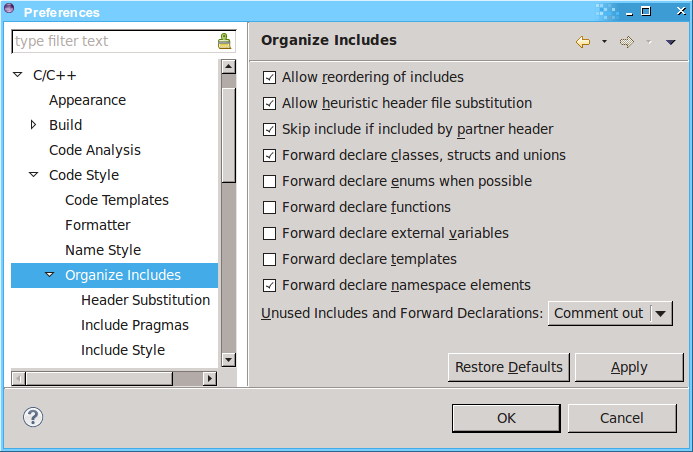 Header files in C and C++ can be included in a source file directly or through other included header files. Sometimes relying on indirect inclusion is ok, but sometimes it may lead to code fragility when seemingly innocent changes not affecting the public API can break compilation of other source files. Consider the following example:


If Graphics.h is refactored by moving the body of the drawLine method and the #include "GC.h" statement to Graphics.cpp, main.cpp will no longer compile.

The Include What You Use principle is intended to prevent this kind of code fragility. According to this principle main.cpp must include GC.h directly because it uses the GC type defined in that file.

Sometimes it is OK to rely on indirect inclusion.


In this example main.cpp can rely on Compare.h providing the definition of MyString class because, due to the existence of the conversion constructor MyString(const char* s), the compare(const MyString& s1, const MyString& s2) method may be called without explicitly mentioning MyString. On the other hand, Compare.h may not be written as:


If it were, main.cpp would have to include MyString.h although it does not mention the MyString class anywhere.

In some cases indirect inclusion is mandatory since some header files are simply not intended to be included directly. For example, to use std::vector someone has to include <vector>, not <bits/stl_vector.h>, which contains the definition of std::vector.

In some cases any of a set of headers can be included for a particular symbol. In such situations Organize Includes tries to include headers that minimize the number of #include statements. 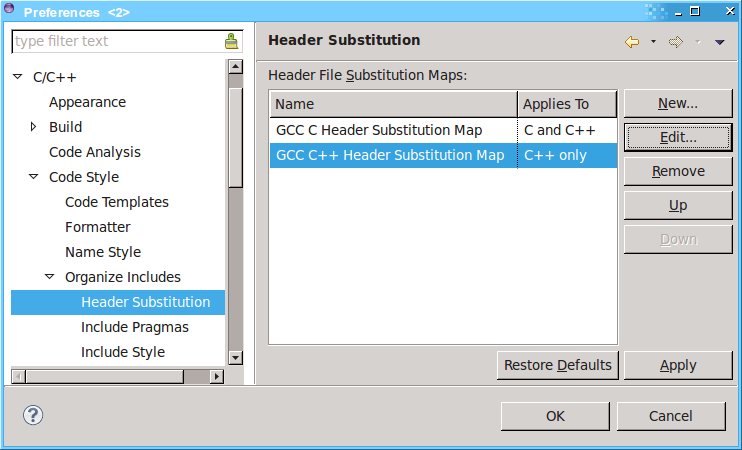 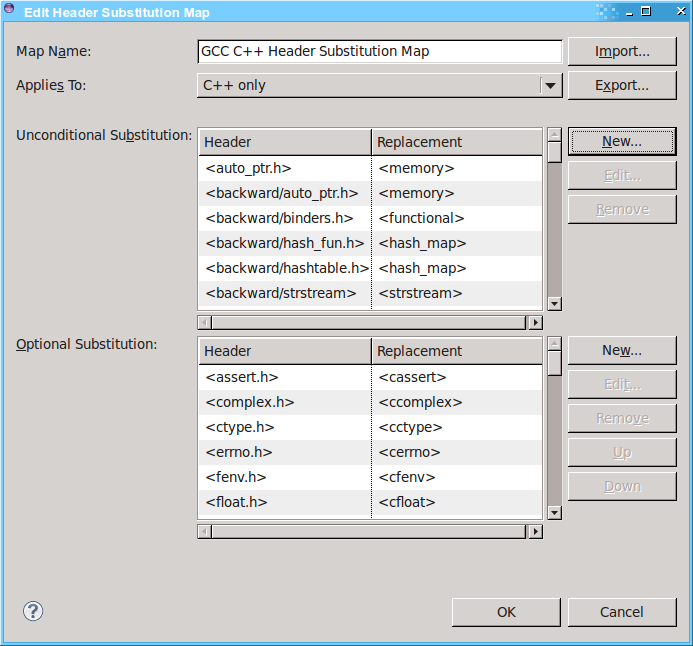 Another factor that contributes to rules for indirect inclusion is include pragmas in header files.


Facade.h exports detail/Types.h and detail/Constants.h and may be included instead of these header files that define the Thing class and the MAX_THINGS constant.

Include pragmas are configurable in preferences. The default is compatible with the Include-What-You-Use project. 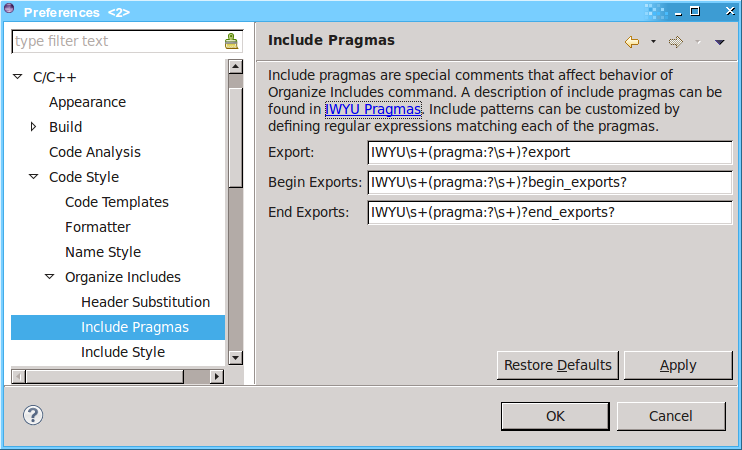 Ordering of #include Statements 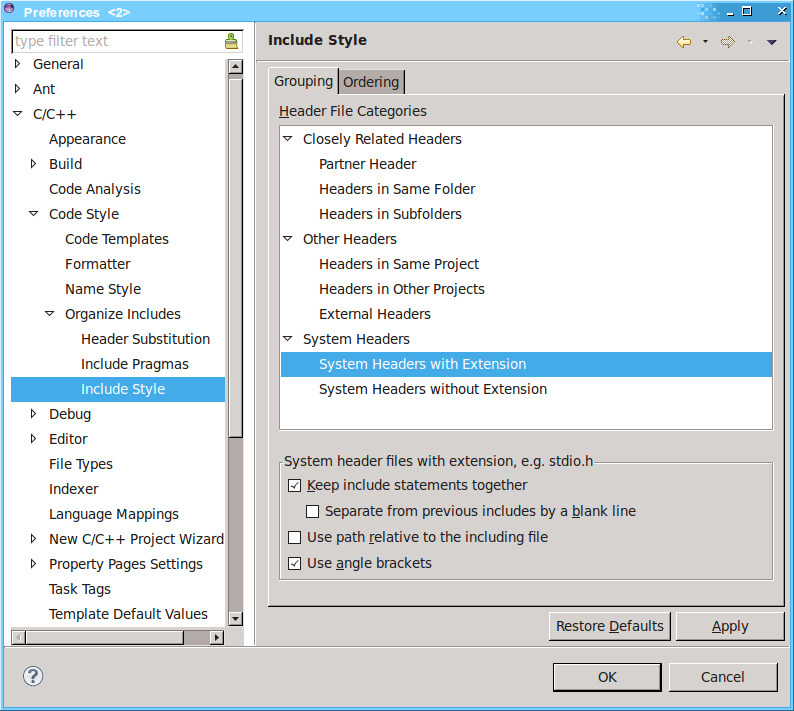 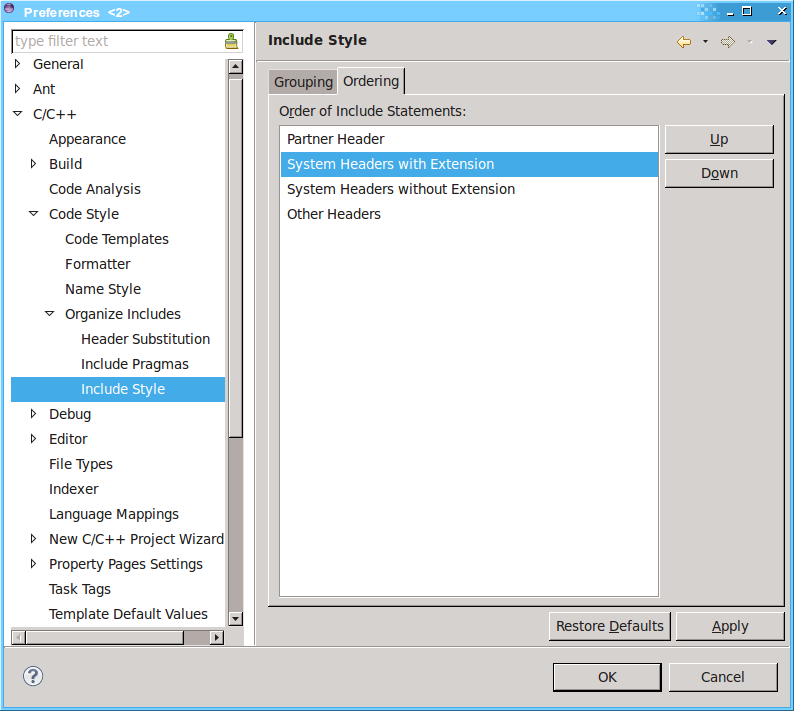 All header files that don’t fall into any category with the Keep include statements together option enabled, are grouped under Other Headers.

If you are curious how Organize Includes is implemented or would like to extend its functionality, the code is located in the CDT GIT repository and can be viewed here.

If you don’t like tweaking your tools as long as they work, simply start using Shift+Ctrl+O in C/C++ editor and stop worrying about those messy #include statements.