Oomph: A Matter of Preference

If there were one best way to do everything, and everyone agreed, life would be simple. But life isn't simple. Each person has an opinion on what's best. When we provide user interfaces, we generally try to take that into account. I recall well my corporate days designing user interfaces with the involvement of usability specialists. The specialists of course have their own opinions, often contrary to the developers' opinions. But they are professionals so they can back their opinions up with facts, including with usability studies involving real live users using the software. The basic premise is that the user is king. What the user says is confusing, is by definition confusing. What the user says she wants, she should get. Of course as soon as you have two users they will contradict each other, but each is nevertheless king of the world and necessarily correct.

This is the situation where preferences seem to be a great solution. Just support both desired approaches and let each user choose what they prefer. Unfortunately, that introduces five new problems.

Welcome to a world where everyone has an opinion. There's simply no pleasing everyone. Take careful note too that even if you provide all the possible preferences that should in theory please anyone and everyone, that still isn't going to do the trick, because it will be confusing and overwhelming for the new user.

Eclipse's rich offering suffers from all these problems in spades. There are just way too many preferences, some of the defaults are arguably wrong, and, worst of all, Eclipse's preference architecture simply does not match the actual needs.

The astute Eclipse user will realize that preferences are scoped, but I'm willing to bet very few users, or even Eclipse developers themselves for that matter, fully understand the preference architecture. If you're interested, Oomph provides a preference tool that allows you to explore all Eclipse's preferences. 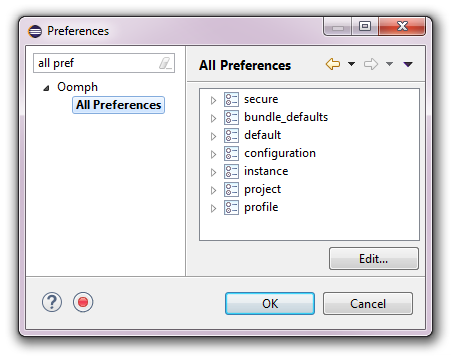 I'll bet you didn't know it was this complex!

The instance preference scope is the one you likely all know and love (to hate). Most of the preferences you change in Eclipse's Preference dialog are of this scope, i.e., are specific to the current workspace. But ask yourself, if I want line numbers for my editors in one workspace, isn't it highly likely I'll want them in all my workspaces? In fact, isn't that the case for most of the preferences you change? So why do I have to set them for each workspace? Of course there are exceptions, for example, the name of the workspace. Did you know you can set the name of the workspace? On some operating systems, that even makes the task bar more useful, i.e., you can tell all your running Eclipse instances apart. Of course that wouldn't be useful if every workspace has the same name, would it? So all in all, instance scope is actually very annoying and doesn't generally fit well with our needs.

An extremely powerful capability that's badly under used is project-scoped preferences. For example, you can set all your Java preferences on a per-project basis. This way, every workspace that contains those projects will have the appropriate preferences, eliminating the need for instance scoped preferences. Moreover, different projects can have different preferences. For example, if you have Java projects with generated code, you probably will need to have different preferences for those, because the code is likely not generated to match your personal preferences. So that's all great, but what happens if you have 100 projects? Given that JDT has 1000 preferences, this means you'll be setting, 100,000 preferences. No one does that, except those with obsessive compulsive disorder. Yes, okay, people find reasonable hacks, e.g., scripts to copy the *.pref files from one project to another, but that's still a pain should you ever need to change them, or when JDT introduces new preferences, which it does every release. So most people just use instance scope instead.

Oomph aims to address these problems. To deal with the preferences that severely traumatize the common user, Oomph has an introductory questionnaire to make users aware of some of the most likely things they’ll want to configure. 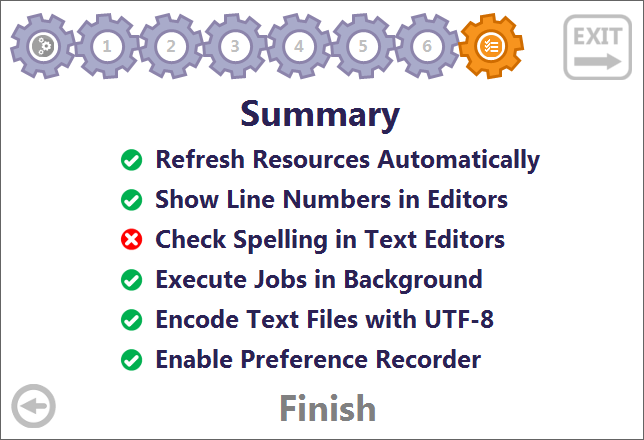 We picked a few of the most commonly stated reasons why people hate Eclipse that can simply be preferred away. The questionnaire lets the user choose, once and for all, which preference she likes best, e.g., line numbers or not? I hate them, but many of you probably love them. Why shouldn't we all be happy?

The preference choices are recorded as Oomph tasks that are applied to each and every workspace opened with an IDE in which Oomph is installed. But that's not all; with Oomph installed the preference dialog itself will have a record button.

As such, all changes the user ever makes can be recorded as Oomph tasks that are uniformly applied to all workspaces. Before the task is recorded, the user is asked if in fact she wants that preference to be the same in all workspaces. If so, she can be sure she'll never need to set it again. If not, she won't be asked about it again. Of course the user can turn the recorder off, too, if she prefers to manage things the old fashioned way.

Also in the works, though not yet ready for prime time, is Oomph's Project Configuration tool. It helps manage project-specific preferences. The basic idea is that all project-specific preferences should be managed by preference profiles. The tool identifies unmanaged preferences and helps set up the management infrastructure for them. For example, if a Java project has project-specific Java preferences---all Java Projects ought to have them though unfortunately most don't---that project should either be the source for those preferences or should be a target for those preferences. So the user picks one Java project as having a "JDT Preference Profile" and identifies which preferences are parts of that profile using patterns. Then she specifies the rule for which other projects should have exactly those same preferences, for example, a rule that all projects in the same repository and with a Java Nature should have those same preferences.

We hope such a tool will help encourage more widespread use of project-specific preferences. This will make it easier to contribute to projects because the projects themselves will specify things like formatting rules and compiler preferences to ensure that contributed code conforms to the project's guidelines. By making these types of things project-specific, contributors can work on many projects in the same workspace without disagreement on what the workspace's overall instance preferences should be; those preferences should reflect the user's personal choices, not the project's choices.

We believe that the sum total of Oomph's technologies tames the savage preference beast. That it makes the life of Eclipse users and Eclipse developers easier and more enjoyable, so they can focus on creativity, undistracted by battles to whip Eclipse into the shape they want.