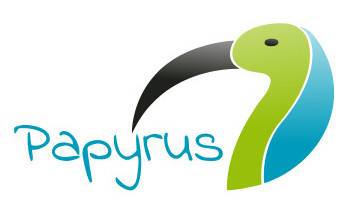 This article introduces the Papyrus tool, an Eclipse-based visual editor for Unified Modeling Language (UML [1]) modeling. This open source application has two principal objectives: first, it aims to implement the complete UML specification (currently version 2.5), enabling it to be used as the reference implementation of the Object Management Group (OMG) standard. Second, it intends to provide an open, robust, highly scalable, and highly customizable tool for defining Domain-Specific Languages (DSLs) and corresponding tools via the UML profile mechanism. It enables hence to benefit advantages of standard-based solutions in one hand and efficiency of domain-specific modeling solutions in the other hand. Finally, Papyrus is also intended to support large-scale industrial projects, as indicated by the growing list of industrial supporters. Consequently, it provides an efficient and effective alternative to custom and proprietary DSL tools, without losing the benefits of an international standard.

Finally, Papyrus will also serve as an experimental platform for researchers who need to construct proof-of-concept prototypes. Built on top of Eclipse as an open source project, Papyrus is an ideal candidate for this purpose.

As part of its Model-Driven Architecture (MDA) initiative, OMG, an international consortium representing numerous industrial and academic institutions, has provided a comprehensive series of standardized technology recommendations in support of model-based development of both software and systems in general. These recommendations cover core facilities such as meta-modeling, model transformations, general-purpose languages, and Domain-Specific Modeling Languages (DMSLs). A key component in the latter category is UML, which has emerged as the most widely used modeling language in both industry and academia.

A number of tools supporting UML are available from a variety of sources. However, these are generally proprietary solutions whose capabilities and market availability are controlled by their respective vendors. This can be problematic for industrial users, who may require highly specific tool capabilities as well as long-term support that often extends beyond the point of commercial viability.

Consequently, some industrial enterprises are seeking open source solutions for their UML tools. Researchers have a similar need, since proprietary products are often too constraining and inflexible to allow optimized implementation of new ideas and prototypes.

The Eclipse platform along with its modeling high-level project, and the PolarSys Eclipse working group, are the environment of choice for developing open source tools for enabling and fostering model-driven engineering (MDE). Indeed, within this context, there are two projects dedicated to implement UML. First, there is the UML2 project providing an EMF-based implementation of the UML2 meta-model. This component has become the de facto standard implementation of the UML2 meta-model. Secondly, based on this UML2 component, Papyrus provides user-oriented tools to enable UML2 visual modeling within Eclipse. It includes all its usual graphical editors as defined in the standards, but also other editors enabling tabular-based, text-based, tree-based and form-based views.

Papyrus became an Eclipse open source project in August 2008, and the first code was delivered in November 2008. The Eclipse Luna simultaneous release, scheduled for June 2014, will include Papyrus 1.0. This release represents an important milestone for Papyrus. The project has reached true maturity and its product has developed into an industrial-strength tool. Release 1.0 will include new features and major advances in usability and robustness. 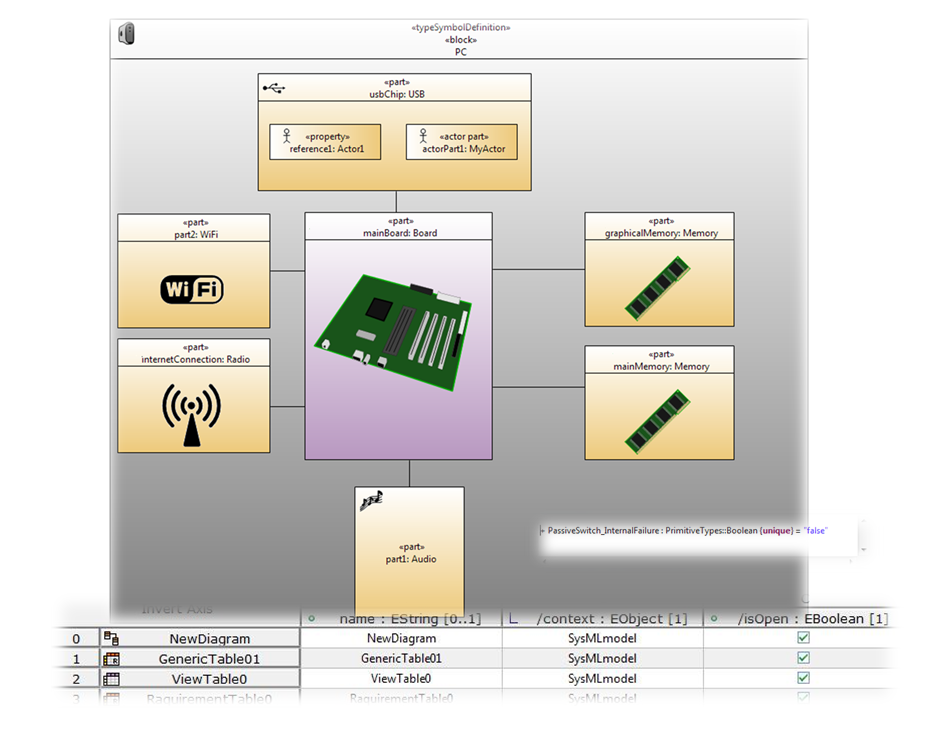 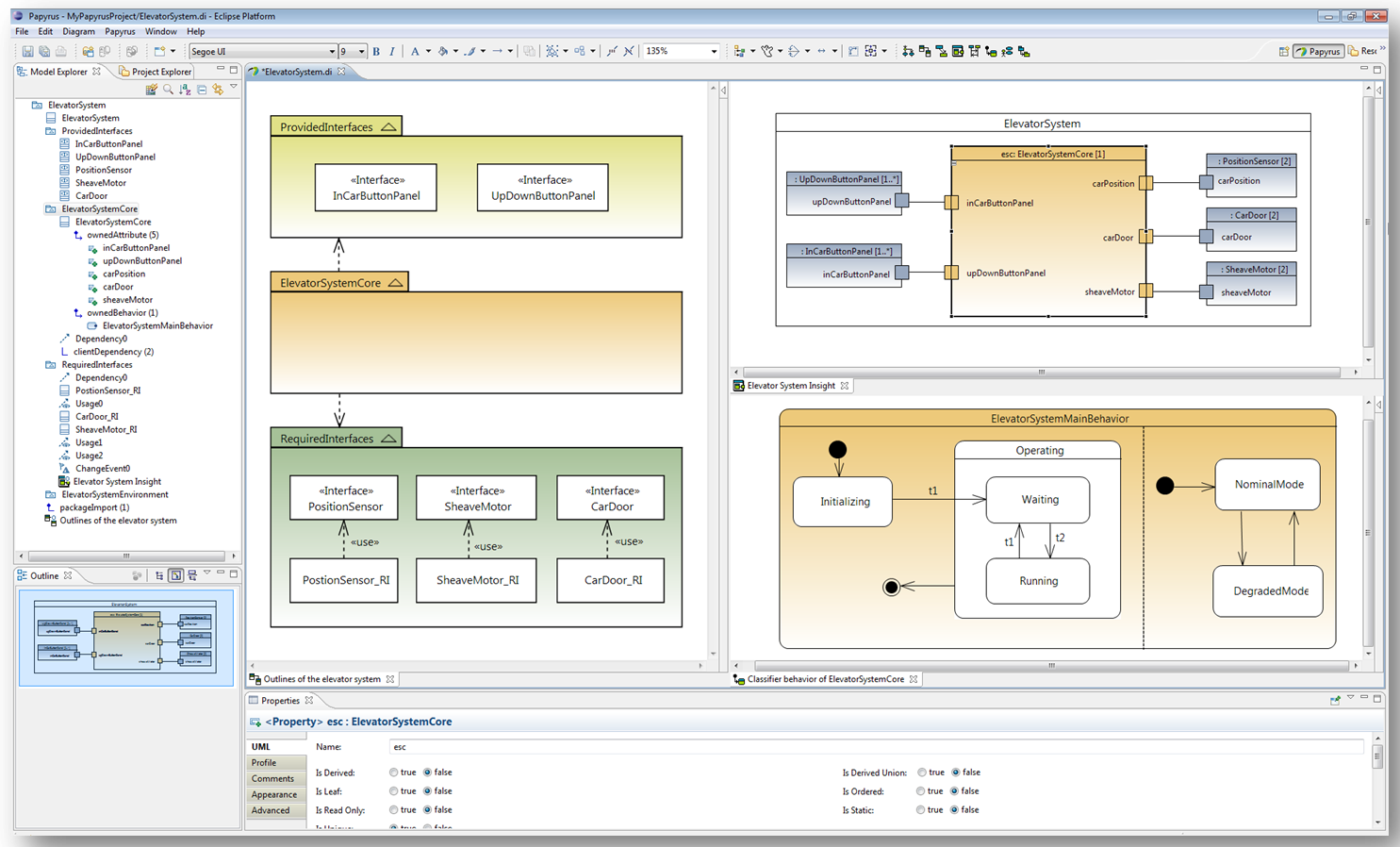 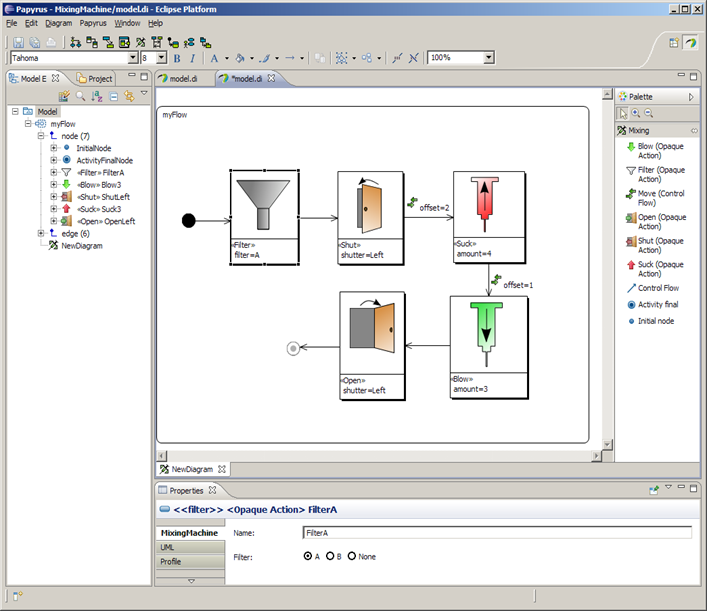 Papyrus has already been adopted by different industries, including Esterel Technologies:

"Esterel Technologies has chosen the Papyrus technology platform as a core component of its SCADE System model-based systems engineering product offering and is extremely pleased with its quality and efficiency as well as the common developments undertaken in partnership with and CEA LIST within our common LISTEREL Laboratory."

Papyrus allows support for all diagram types defined in UML2. A Papyrus user can therefore build UML2 models that strictly conform to the standardized specification of the language. Papyrus can then be used to check against the UML specification. If something cannot be represented in Papyrus, this generally means that it is not allowed by the specification.

Papyrus provides numerous functions in support of UML 2 modeling. The following list, while not complete, represents some of its advanced modeling features:

To meet the primary goal of realizing the UML2 specification, Papyrus also provides extensive support for UML profiles. It includes all facilities for defining and applying UML profiles in a very rich and efficient manner. It also provides powerful tool customization capabilities similar to DSML-like meta-tools.

The main intent here is to enable the profile plugin of Papyrus to dynamically drive its customization as defined by a profile. When applying a profile, Papyrus may adapt its visual rendering and GUI to fit the specific domain supported by that profile. If the profile is unapplied later, the tool resumes its previous configuration.

Finally, when embedding a profile within an Eclipse plugin, a designer can also provide a specific properties view that simplifies the manipulation of the stereotypes and properties to make them more user-friendly. The outline editor and the tool menu can also be customized to fit the domain-specific concerns of the profile.