Getting Started with LSP in Eclipse Orion

Eclipse Orion is made up of two different parts: a client portion that runs inside a browser and a server. There are two separate implementations of the Orion server - one written in Java and the other one written in Node.js. For the Language Server Protocol (LSP) work, we used the Node.js server.

The integration of LSP inside Orion focused on getting support for the Java Language inside the Orion editor. The Eclipse JDT Language Server (a.k.a. jdt.ls) is implementing a language server for the Java language based on the well-known JDT projects.

How to get started

To get the latest Orion LSP code, do the following steps:

All steps to contribute and get started are explained in the file called CONTRIBUTING_lsp.md.

Once the build finishes, you can then start the image:

You can connect to it by opening a browser on http://localhost:8083/.

We will now examine the changes made to the Orion server and the Orion client in order to enable support for the Java language inside the Orion editor.

Before we start, we should explain how we got Orion to interact with the language server.

On the Orion server side, there is not much to do to get the language server communication going. We defined an extension that we register in the server code (see line 100 in server.js). That extension starts listening on a named socket that is used to start and initialize the LSP server.

The current implementation supports most of them. Once the server is started and initialized on your workspace contents, the user can format code, get problems and warnings, search for references, get Javadoc hovers, get errors/warnings as you type, etc.

Right now, there is no support for code actions. So, there are no quick fixes available for the reported error and warnings in the Orion editor.

The editor integration is done using an Orion plugin. The plugin defines a named socket that is used to fire up the language server. The plugin is registered to be initialized on files with the following content types: "text/x-java-source" or "application/x-jsp". These two content types are registered in the Orion plugin for files with extensions ‘.java’ and ‘.jsp’. So, when the plugin is started and initialized, it triggers the connection for the named socket and sends the ‘start’ event. This event initializes the LSP server and enables the two sockets for bidirectional communication between the LSP server and the Orion client. The Orion plugin is also used to register the syntax highlighting for the Java language by using Orion stylers.

Each feature of the Orion editor like content assist, occurrences, etc. has been updated to check whether a LSP server is registered and needs to be handled.

For example, for the formatter, in the file called org.eclipse.orion.client.ui/web/orion/formatter.js, we check whether there is a LSP server registered for the current file content type. To do that, we register all LSP servers inside a registry that is used to speed up the lookup for LSP server based on a specific content type. If we find one, we use it by invoking the corresponding handler from the protocol. In this case, it would be either a document formatting request or a document range formatting request depending on if there is a current selection inside the editor.

We invoke this by doing: 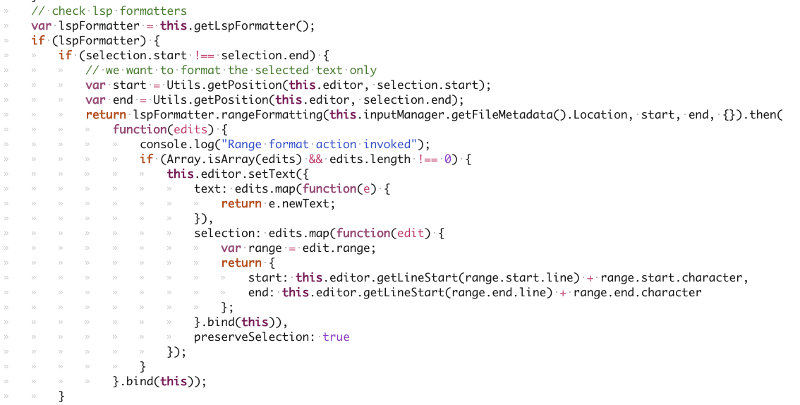 We use the same principle to implement all Orion editor features (occurrences, search references, etc.) that could take advantage of the LSP server features.

We still need to add support for the code action request defined in the LSP to be able to add quick fixes inside the Orion editor.

Right now, the LSP server works fine on Maven and Gradle projects. This is still an area where things are moving fast. So, it is possible that more projects settings will be handled in the future.

We also need to see how we can leverage the support for the JavaTM language to other languages like what is done with the generic Eclipse editor.

Feel free to contribute to either the Orion integration or directly to the Eclipse Java LSP server implementation.

This is what you get once it is running: 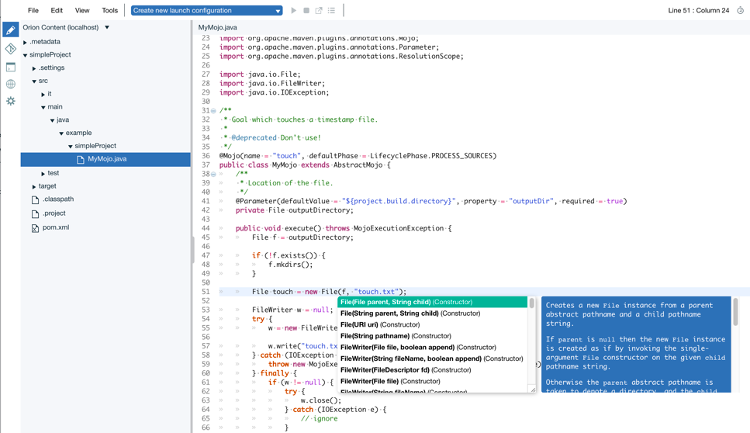 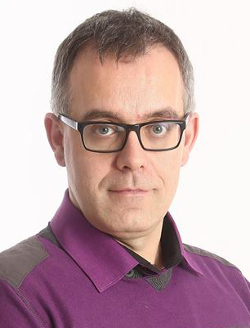